La Française was founded in 1890 by Victor Pierre Besse and François Tripier. They were producing cars, motorbikes and bikes. They had also their own ‘professional’ cycling team, simply called La Française. Their team existed from 1901 to 1955. Maurice Garin won the 1903 Tour de France with the bike La Francaise Diamant. Their rider Léon Scieur won the 1921 Tour de France when riders participated as individuals. 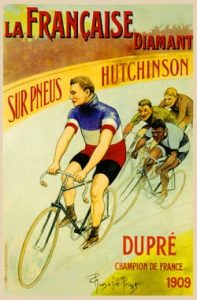 Maurice Garin‘s (March 3, 1871-February 19, 1957) list of victories isn’t long, but it is extraordinary. Among other races, he won Paris-Roubaix twice, the Tour de France, Bordeaux-Paris and Paris-Brest-Paris. He is most famous for winning the first edition of the Tour de France in 1903. It was a completely dominating victory where he won three of the six stages and his winning margin of 2 hours, 49 minutes and 45 seconds remains the largest in Tour history. 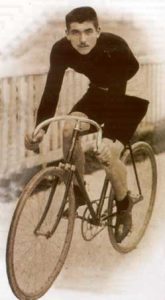 The 1903 Tour de France was the first cycling race set up and sponsored by the newspaper L’Auto, ancestor of the current daily, L’Équipe. It ran from 1 to 19 July in six stages over 2,428 km (1,509 mi), and was won by Maurice Garin. Originally scheduled to start in June, the race was postponed one month, and the prize money was increased, after a disappointing level of applications from competitors. The 1903 Tour de France was the first stage road race, and compared to modern Grand Tours, it had relatively few stages, but each was much longer than those raced today. The cyclists did not have to compete in all six stages, although this was necessary to qualify for the general classification. The pre-race favourite, Maurice Garin, won the first stage, and retained the lead throughout. He also won the last two stages, and had a margin of almost three hours over the next cyclist. The circulation of L’Auto increased more than sixfold during and after the race, so the race was considered successful enough to be rerun in 1904. 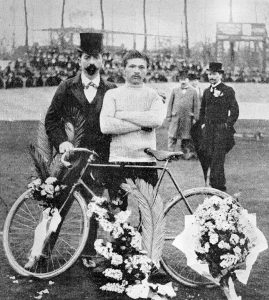 Happy to offer one of the oldest racing bikes – LA FRANCAISE Diamant which dates back to 1905-1907 and comes with vinatge wool jersey (same was used by La Francaise Team back in 1905) and a photo from French National library with La Francaise riders at the Tour de France from 1910 approximately. Feels almost impossible, but the bike still has original paint and head badge. Most of the parts on the bike are still original. Crankset and pedals are marked Diamant. Serial number stamped on the left side od the seat tube near seat bolt and left rear drop-out. A piece of the cycling history.

Condition: Used. Some rust. No cracks, no dents, not bent. Potentially ready to ride.