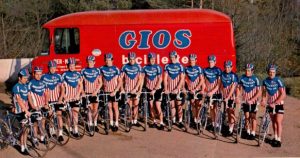 Here we are proudly presenting another Italian steel icon – the GIOS Torino Super Record, which dates back to 1981. Superb frameset is made of Columbus SL tubing which were the tubes of choice for the pro-riders. It’s easy to recognize a special fork crown with iconic ”Gios coins” which basically covered the air-holes used during the forks welding. Completely built with Campagnolo Super Record groupset, Cinelli pantograph Gios cockpit, San Marco Concor saddle, Mavic rims. The bike comes with a vintage merino wool Brooklyn cycling kit and Brooklyn Eroica water bottle. No much words needed.

Condition: Used, but good condition. The frame was completely restored and refubrished. No cracks, no dents, not bent. All parts are working fine.