Bianchi’s Reparto Corse (Bianchi’s Race Department) facility hand built frames for their top riders and of course Marco Pantani was one of them riding for Mercatone Uno sponsored by Bianchi. Their top model Mega Pro XL was made of exclusive set of Triple Butted SC61.10A heat treated shaped tubes. Aluminum was the material of choice back then, even some of his biggets rivals rode full carbon bikes. 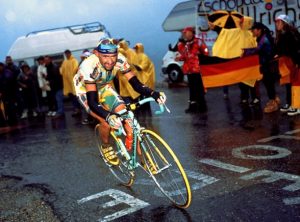 Unique chance for all Pantani fans to get this amazing replica.

Condition: Used, but good condition. No cracks, no dents, not bent. Some touch-ups signs of normal use. All parts are working fine.