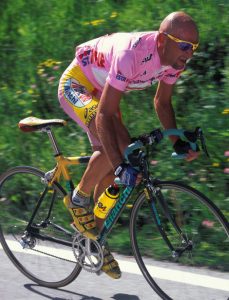 Bianchi’s Reparto Corse (Bianchi’s Race Department) facility hand built frames for their top riders and of course Marco Pantani was one of them riding for Mercatone Uno sponsored by Bianchi. Their top model  XL EV2 Reparto Corse is made of lightweight triple-butted alloy shaped tubeset. Aluminum was the material of choice back then, even his biggets rival Lance Armstrong rode full carbon Trek 5500 that season. XL EV2 met Pantani’s  specifications with slightly sloping geometry, and a relatively short head tube to suit his aggressive in-the-drops climbing style. Though not super-stiff as compared to today’s carbon fiber machines, Pantani’s bike was light, even by modern standards.

Great chance for all Pantani fans to get this extraordinary piece.

Condition: Used, but very good condition. Original paint and decals. No cracks, no dents, not bent. Groupset is in excellent condition.