Battaglin Giovanni is a legendary former cyclist and was born on 22nd July 1951 in Marostica (Vicenza, North-East Italy). In 1981, in space of less than two months, he won Vuelta and Giro and was only the second rider after Eddy Merckx to win the Vuelta-Giro double. In early 1980s, on the wake of his cycling’s successes and after a violent bike crash, he decided to start building bikes in a tiny workshop near his hometown. Very soon he launched his first bicycle. 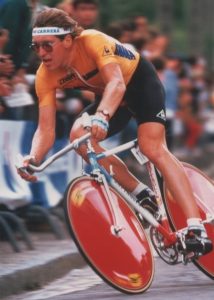 Condition: Used, but good condition. The frame has no cracks, no dents, not bent. Some touch-ups and signs of normal use. All parts are working fine.