Mario Rossin worked as a frame builder at Colnago for several years. After a conflict with Ernesto Colnago, he and his 4 partners from amatuer team founded Cicli Rossin, on September 14, 1974.  The “R” in the Rossin logo was adopted from Rossignol skis, and the pentagon represents the five founding members of the company. Mario Rossin was the design genius behind the company’s begining and ever since then the Rossin name has been one of innovation and racing success. Rossin became high profile bike manufacturer through 1980s and 1990s with sposnsoring top level teams. 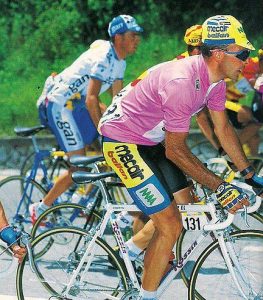 M.Argentin (Mecair Ballan) in maglia rosa at the Giro d’Italia 1993

Happy to offer this oustanding  piece of the cycling history – ROSSIN Performance EL ridden by ”The boss” Moreno Argentin back in 1993, when he rode for Mecair Ballan Team. The frame is made of superb Columbus Extraleggeri EL tubing, featuring the perfection and attention to details to provide the best performance. The bike is in completely original conditon build with Shimano Dura Ace 7402-7410 groupset, 3ttt Rossin cockpit, Flite Titanium saddle, Ambrosio wheels. We got it from E.Bombini, the team manager of Mecair Ballan and Gewiss Ballan and he also wrote a statement this in one of Argentin’s bike from 1993.

Condition: Used, but good condition. Some signs of normal use, some paintchips. Original paint. No dents, no cracks. Groupset and components are in good condition.