In 2000, Pinarello launched the ”PRINCE” , a top level model which immediately claimed the title of ”most winning” bike and was used by 2 very famous teams – Team Telekom and Fassa Bartolo. Fassa Bortolo 2001 was an Italian based team was managed by G.Ferretti with very strong riders on board like M.Bartoli, A.Petacchi, D.Frigo, F.Casagrande, I.Basso,R.Rumsas…

Alessandro Petacchi (born 3 January 1974, La Spezia) is a former Italian pro-cyclist, sprint specialist. Petacchi has won 48 grand tour  stages with wins of the points jersey in the Giro, Tour and Vuelta. He also won the classics Milano-San Remo and Paris-Tours. Over 18 years, he won 183 victories and because of his incredible speed he got a nickname ”ALE-JET”. 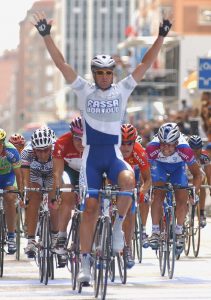