The story begins in the mid 70s, when Antonio Colombo joins his father’s company A.L. Colombo, a giant involved in producing steel tubes for bicycles, cars (like Ferrari, Alfa Romeo, etc.), motorbikes (Moto Guzzi, etc.), aeroplanes (like Caproni, the very first plane to fly over Atlantic Ocean). In 1977 he resigns as A.L. Columbus president and separates Columbus from the rest to develop bicycle tubing production, giving birth to one of the most famous brand in cycling history.

In the 80s Colombo takes over Cinelli, a small  high end bicycle and components factory founded by Cino Cinelli, a former pro rider between 1930s and 1940s, winner of three Giro d’Italia stages (1938, 1939), a Giro di Lombardia (1939) a Milano-Sanremo (1943) and many other races. In 1948 Cino decides to retire from pro cycling to found his own factory that will become a benchmark in the bicycle world. Someone may remember him as a rider, many others remember him as the father the first aluminium handlebars, the first seat with a plastic core, the first pedal straps, the first quick release pedals. At the same time also Andrea Cinelli , son if Cino Cinelli wanted to create some revolutionary bikes. His project was “CINETICA”. 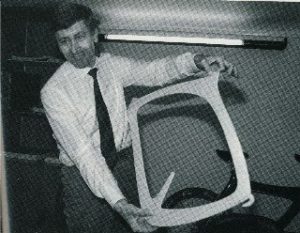 In the 1980’s, Andrea Cinelli who hails from the Cinelli name decided to manufacture the ultimate racing frame. He designed the  Cinetica Giotto – a true carbon fiber monocoque built racing frame, actually one of the rarest racing frames ever produced and many years ahead of its time. Handmade in Italy with the expertise and cooperation of 3 world class companies: Cinelli, Campagnolo, Ferarri. Sadly, only several dozen were ever made. It was just too expensive to manufacture, aside that many of them broke. All the Cinetica frames used Campagnolo dropouts stamped: Cinetica. As for the paint, it was provided by Ferrari along with its carbon expertise.