Giuseppe Olmo (22 November 1911 – 5 March 1992) was an Italian road bicycle racer. He competed at the 1932 Olympics and won a gold medal in the team road race, placing fourth individually. In October 1935 he set a new world record for an hour’s run at 45.090 km. As with many Italian bicycle racers, after his retirement in the late 1930s he began building bicycles, and founded Biciclette Olmo. His manufacturing center was set up in his home town of Celle Ligure, Italy.

Later in his life, Giuseppe (Often called “Gepin” for short) came to be known as a successful entrepreneur and between the 1940s and 1970s he expanded his company into several manufacturing industries. They produced some very high quality bicycles often comparative quality to the great Colnago. 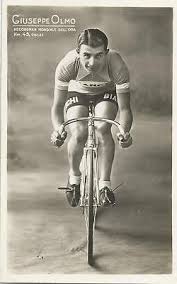 In mid 1980s Olmo lauched their top model ”Leader” and immediately became very popular. Like all Olmo’s bikes also this one shows extraordinray details of lugs which were carefully filled and customized for highest performance. Olmo used 3 different varieties tubing for his ‘Leader’ but always the finest  and very exclusive tubing: Columbus MS, Columbus Air, Columbus profiled tubing. Our Leader is made of rounded Columbus tubing with five distinct symmetrical flutes (Colnago Regal is made of same tubing but has 6 flutes instead of 5).

Happy to present this beautiful example of Italian cycling craftmanship, the OLMO Leader, which dates back to 1987. The frameset is work of art, made of profiled Columbus SL tubing with Columbus Air forks and Cinelli bottom bracket shell. Featuring the perfection and attention to details to providing the best performance you might expect from mid 1980s steel racing bicycle. ”G.Olmo” signature engraved on the rear brake bridge, on the top of seatstay , at the top of bottom bratcket sheel and fork crowns. Build with Campagnolo Chorus 1st gen groupset, 3ttt Olmo cockpit and Ambrosio wheels. Ready for serious riding or just for Sunday coffee ride.

Condition: Used, but excellent condition. No cracks, no dents, not bent. Original paint. Some tinny signs of normal use. All parts are working fine.