Battaglin Giovanni is a legendary former cyclist and was born on 22nd July 1951 in Marostica (Vicenza, North-East Italy). In 1981, in space of less than two months, he won Vuelta and Giro and was only the second rider after Eddy Merckx to win the Vuelta-Giro double. In early 1980s, on the wake of his cycling’s successes and after a violent bike crash, he decided to start building bikes in a tiny workshop near his hometown. Very soon he launched his first bicycle.

Refin–Mobilvetta, previously known as Brescialat-Ceramiche Refin and Refin-Cantina Tollo, was an Italian based professional cycling team active from 1995 to 1997. From 1995 to 1997 the main sponsor was Ceramcihe Refin, an Italian ceramics company. In 1996, Refin–Mobilvetta signed up Djamolidine Abdoujaparov who won many important races thanks to his skills as a sprinter. After a good year in 1996, the team registered for the Tour de France, where they won the 15th stage thanks to Abdoujaparov. In 1997 they rode Giro d’Italia and Vuelta a Espana with many very talented riders on board: L.Piepoli, G.Balducci, L.Mazzanti, T.Steinhauser… The entire team rode Battaglin Power+ bikes and Campagnolo Record Titanium 9s groupsets. 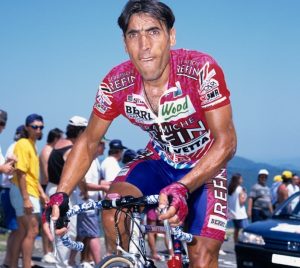 Happy to present this Italian racing machine that was ridden  – BATTAGLIN Power+ by Reffin Mobilvetta Team 1997. Superb frameset is made of superlight aluminium, with still forks, marked with no.16 under the bb shell (waiting for a confirmation by ex-Refin mechainc to which rider that bike belongs). Completely original build with Campagnolo Record Titanium 9s groupset, Moskva wheels, ITM cockpit, Battaglin saddle, bar tape, bottle.

Condition: Used, but good condition. The frame has no cracks, no dents, not bent. Original paint and decals. Some touch-ups and signs of normal use. All parts are working fine.