Eddy Merckx ”The Cannibal” was born on June 17 1945 and was a professional cyclist from 1961 to 1978. Cycling fans consider him to be the most successful cyclist in history, with 525 victories to his name.  He won the Tour de France and the Giro d’Italia five time each, has won all of the top events except for the Paris-Tours, has won the Vuelta a España, has won the world championship as both a professional and as an amateur, and has broken the world hour record.

The Eddy Merckx Company was established in 1980 with a mission to produce the finest bikes in the world. Of course, Eddy is still at the heart of the company, and his eye for details and quality strives to highest  standards. He is an integral part of the design process, and always tests each new model himself.

In the mid-80’s through mid-90’s, Merckx sponsored a number of very successful professional cycling teams such as Team Telekom-Merckx, Team 7-Eleven, Team Motorola amongs the other. Team Telekom-Merckx was a top level team in early 1990s, was renamed to Team Telekom Merckx in 1992. 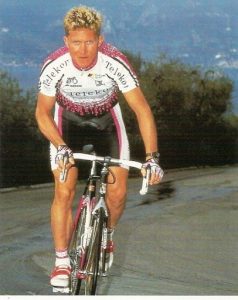 Condition: Used, but good condition. Some signs of normal use. Original paint and decals. No dents, no cracks, not bent. Groupset and components are in good condition.