Colnago Super is for sure one of the most succesful racing bikes in history. It was released in 1968, produced for more than 20 years, was Colnago’s top model of late 1960 and 1970s and became a legend with Eddy Merckx ridding for Molteni Team. The Super was designed for professionals riders and thanks to Columbus SL tubing it was a synonym for stiffness and lightnes.

Eddy Merckx ”The Cannibal” was born on June 17 1945 and was a professional cyclist from 1961 to 1978. Cycling fans consider him to be the most successful cyclist in history, with 525 victories to his name.  He won the Tour de France and the Giro d’Italia five time each, has won all of the top events except for the Paris-Tours, has won the Vuelta a España, has won the World championship as both a professional and as an amateur, and has broken the world hour record. The Cannibal joined at the end of 1970, having twice won the Tour de France and two editions of the Giro di Italia. 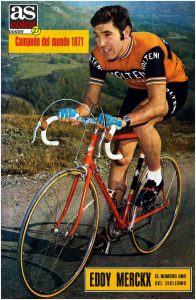 Love at first sight. Ready for any historic cycling event.

Condition: The frame was completelly restored and refubrished. The frame has no cracks, no dents, not bent. Groupset is in very good condition. All parts are working fine.