Ernesto Colnago is a tireless technological innovator, but also an entrepreneur of great intuition as well. The technical and commercial collaboration with the Soviet Union the late 1970s and early 1980s brings a precious return of image, as well as important successes such as the gold Olympic medal from Moscow.

In late 1970s he designed and built an outstanding time trial machine especially for the team time trial 100km event at the 1980 Olympics in Moscow for the Russian Team. That oustanding lightweight bicycle with total aerodynamic approach was way ahead of the time and features crimped steel tubing of reduced-diameter; front brake caliper mounted to the rear of the fork while the rear brake caliper was attached inside the back triangle; 26/28 (650/700) wheels. 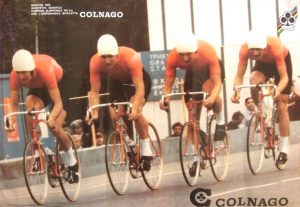 Here we are proudly offering one of the most advanced time trial machines of its time – COLNAGO Mexico”Aerodinamica” made especially for USSR 4x100km team time trial event at the Olympic Games in Moscow 1980. Extraordinary frameset is made of  prototype crimped Columbus SL tubing, shining in original condition with Campagnolo Super Record parts, 3ttt Aero handlebar and special 3ttt Aerodinamica Colnago stem… No much words need needed.

Condition: Used, but good condition. The frame has no cracks, no dents, not bent. Original paint and decals. Some signs of normal use. All parts are working fine.