Moreno Argentin was born in 1960 in Veneto (Italy) and was one of the best Italian cyclist. Known as ”Il Capo” (”The Boss”), he won stages at the Tour, Giro and won 4x Liege-Bastogne-Liege, 3x La Fleche Wallonne, Tour of Flanders and Giro di Lombardia. He reached the top whe he won a World Championship in Colorado Springs 1986. In years 1987-1989 he was part of famous Bianchi Gewiss Team and racing on extraordinary Bianchi Specialissima X4 road bike. in 1986 Bianchi collaborated with Italian carbon pioneer C4 and they created a really impressive time trial racing machine which became a legend… 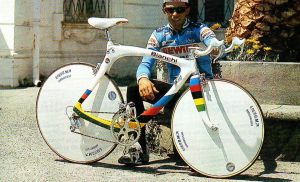 M.Argentin with Bianchi C4 Prototype TT bike back in 1987

A dream for every vintage bike collector. Eroica ready.