In 1999 Trek Bicycles became the first bike manufacturers outside of Europe to win the world’s most prestigious bicycle race, the Tour de France, with US Postal Service leader Lance Armstrong‘s triumphant performance. Armstrong and his unrelenting teammates race on stock Trek 5500 OCLV carbon frames, making them the only team in the Tour de France to race on frames identical to those that are available to consumers around the globe. Thanks to Optimum Compaction, Low Void (OCLV) technology, the 5500 was the world’s lightest production frameset, weighing in at a scant 912g.

Lance Edward Armstrong (born September 18, 1971 in Plano, Texas, USA) is an American ex-pro rider. He won the Tour de France seven times in a row, from 1999 to 2005. He did this several years after having brain surgery, testicular surgery, and a long course of chemotherapy in 1996. The chemotherapy was to treat testicular cancer that spread to his brain and lungs. Armstrong used to race for the US Postal and Discovery Channel, but was only team leader during the Tour de France. After the career his titles were taken away. 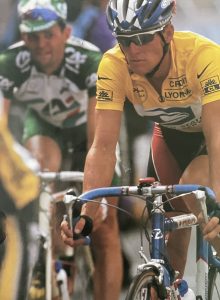 Lance Armstrong (US Postal) at the Tour de France 1999 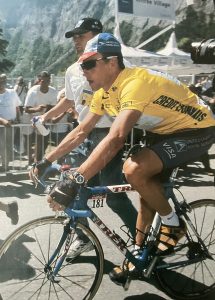 Lance Armstrong on his TREK 5500 during Tour de France ’99

Here we are proudly presenting a legendary racing machine – TREK 5500 OCLV US Postal which dates back to 1999. It’s identical to L.Armstrong, in every single detail: same frame and size, same groupset, same wheels, same stem&handlebar, same saddle, same pedals. Unfortunately, we don’t have the proof it was used by Lance back in TdF ’99. Otherwise the price would be much much higher.

Condition: Used, but excellent condition. No cracks, no dents, not bent. Few touch-ups and signs of normal use. All parts are working fine.