The Roberts family has been building top-quality made-to-measure bicycles and frames for more than 60 years and has established an enviable reputation across three continents. Beginning soon after WWII, Charlie Roberts started working as a frame-builder for some of the great names in British bicycles – Holdsworth, Claude Butler and Freddie Grubb. Among many outstanding achievements, his track frames were particularly highly regarded by the experts, professionals and Olympians alike.

In the early 1960s, Charlie branched out on his own and opened ROBERTS Cycles in Croydon, not far from their present location. Soon after starting up, Charlie was joined in the workshop by his son Chas. In the 50 years since, Roberts Cycles consolidated its position as one of the finest bespoke bicycle producers in Britain. In 1979, Charlie, the founder of the business, passed away and Chas took over. Throughout its history, Roberts Cycles has maintained the exacting engineering standards set by Charlie Roberts, kept abreast of cutting-edge technologies and presented work that demonstrates a passion for elegant design.

Roy Cox was six times British Champion, won big on the German ‘stayer’ circuit, rode four World Championships and made the Worlds final in his home Worlds in 1970 – the first British amateur to do so in 70 years. 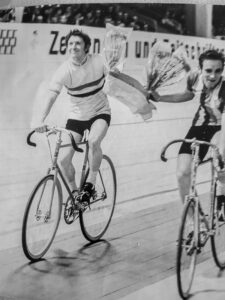