GIS Gelati Team was one of the strongest back in 1984 with two champions on board Francesco Moser and Roger De Vlaeminck. Other solid riders were: P.Masciarelli, S.Giuliani, M.Havik, M.Ghirotto... 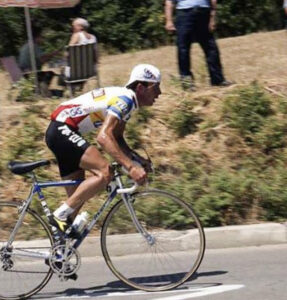 Here we are proudly presenting a beautiful MOSER Super Prestige, a racing bike of Stefano Giuliani from 1984, when he raced from GIS Gelati Team. Superb frame is made of Columbus SL tubing, Campagnolo Super Record groupset, 3ttt Moser stem and handlebar. Shining in original paint in great condition. No much words needed.

Condition: Used, but good condition. Original paint and decals. Some signs of normal use. No cracks, no dents, not bent. All parts are working fine.