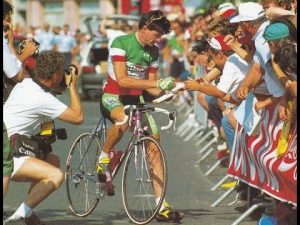 Here we presenting another beautiful Italian racing machine  MOSER Leader AX which dates back to 1991 and is almost identical to G.Bugno’s bike from that year. Superb framest is made of magnificient ORIA FSB (fillet silver brazed) , definetly stiffer than other frames from this era.  Build with top of the line Shimano Dura Ace 8s groupset, ITM cockpit, Selle Italia Turbo saddle and FIR rims.