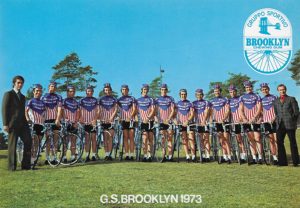 In early 1970s the Italian master framebuilder Gilardi was engaged from Bianchi’s Reparto corse to build bikes for Dreher Team. After a successful job with Dreher he was choosen to build the GIOS BROOKLYN bikes as well. For early 1973 racing season, Brooklyn riders used 1972 Dreher bikes, made by Gilardi, repainted to Brooklyn winning blue colors. All team bikes for pro riders made by Gilardi has a significant ”star” drilled under the bottom bracket shell and this make us underdstand we are talking about a piece of the cycling history here.

Proudly presenting this steel icon – the GIOS Torino Record by BROOKLYN Team 1973. The superb frameset is made of Columbus SL, with signicant ”star” under the bb shell, built with Campagnolo Nuovo Record groupset with 175mm  cranks, Cinelli cockpit and saddle. The GIOS family confirmed this bike belongs to a 1973 BROOKLYN Team. Still waiting for a confirmation, but very likely it’s a Patrick Sercu‘s bike. Unfortunately the sticker with a rider’s name on the a top tube almost disapper, but we can see it’s a short last name with 5 maybe 6 letters. We can find a Patrick Sercu‘s bike at GIOS historical register and this one has the exact same frame measurments. No much words needed.

Condition: Used, but very good condition. The frame has no cracks, no dents, not bent. Original paint and decals. Some signs of normal use. All parts are working fine.