Frejus was founded in 1896 in Torino, Italy by Emmo Ghelfi. He named his brand after the nearby Monte Frejus (on the border of Italy and France) and was one of the first bike manufacturers in Italy (alongside with Bianchi). Emmo and his brother designed and hand-built every frame Frejus produced, focusing on sleek lines, simple lug-work and balanced handling. The Frejus was sposnsoring also their own team called FREJUS which existed from 1935-1956. Their team immediately achieve a success when the great Gino Bartali won 1935 Giro d’Italia on a Frejus bike. Later Giovanni Valetti won the 2 editions of the Giro d’Italia (1938 and 1939). One of biggest cycling stars back in 1940s and early 1950s was Ferdinand Kubler, ridding for FREJUS -Pirelli Team.

Ferdinand “Ferdi” Kübler (24 July 1919 – 29 December 2016) was a Swiss cyclist with 71 professional victories, including 1950 Tour de France and 1951 World road race Championship in Varese, Italy. He began racing professionally in 1940 but his early career was limited to Switzerland by the Nazi occupation elsewhere. He was multiple Swiss national champion and a three time winner of the Tour de Suisse. He won the La Flèche Wallonne  and Liege-Bastogne-Liege, both in 1951 and 1952. He rode the Giro d’Italia from 1950–1952, placing fourth once, and third twice. Kübler was a high-spirited and impulsive rider sometimes given to strategically unwise attacks, out of exuberance and competitive style of racing. He was known as “The Cowboy” because of his penchant for Stetson hats. He retired from racing in 1957 at 38. Kübler died in Zurich on 29 December 2016 at the age of 97. Prior to his death he was the oldest living Tour de France winner. 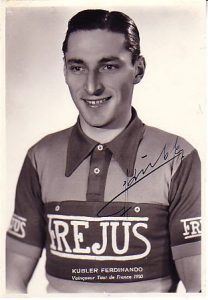 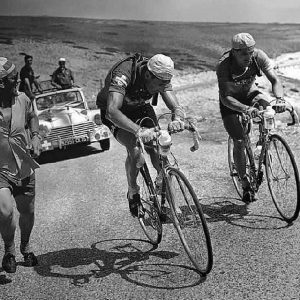 Nice catch for any vintage bike collector. A museum piece.

Condition: The frame was completely restored, re-chromed and refubrished by professional guy. No cracks, no dents, not bent. Looks like it jus came out of the Frejus factory.