Eddy Merckx ”The Cannibal” was born on June 17 1945 and was a professional cyclist from 1961 to 1978. Cycling fans consider him to be the most successful cyclist in history, with 525 victories to his name.  He won the Tour de France and the Giro d’Italia five time each, has won all of the top events except for the Paris-Tours, has won the Vuelta a España, has won the World championship as both a professional and as an amateur, and has broken the world hour record. The Cannibal joined at the end of 1970, having twice won the Tour de France and two editions of the Giro di Italia. In years 1971-72 Merckx rode Colnago Super bike, in 1973 he officially moved to De Rosa and used their bikes till the end of his career in  1978.

Eddy Merckx founded his eponymous bicycle company on March 28, 1980. Merckx had retired as a professional rider a little under two years earlier, and he made the manufacturing of high-end road bikes his new professional challenge. Merckx got the idea to build bikes from Ugo De Rosa, who had built bikes for Merckx throughout last period of his career. Prior to starting his company, Merckx went to Italy, and got trained in the art of making bikes by De Rosa for several weeks. Conversely, Ugo De Rosa visited Eddy Merckx in Belgium to get to know his first employees.

Eddy Merckx’ name quickly became a synonym for one of the most prestigious brands in the cycling world, a reputation it keeps until today. Merckx had always been obsessed with having the best possible bike for his rides.

Ugo De Rosa, one of the most successful frame builders was born on January 27, 1934 in Milan, Italy. His passion led him to study mechanics and engineering at a technical college. Later in the early 1950s he opened his first shop and commenced the manufacture of racing bicycles. He supplied many champions with his high-end bicycles (Gianni Motta, Eddy Merckx and Francesco Moser…), and also strongly influenced the cycling industry with his amazing bikes from Cusano Milanino. 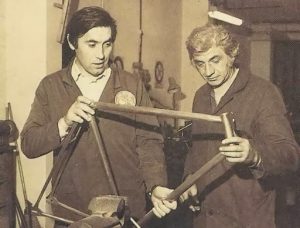 Here we are presenting outstanding  EDDY MERCKX Professional, made with help of Ugo De Rosa,  and dates back to 1980-81, so one of very early Merckx’s. bikes. The frame is work of art, shinning in original metallic blue paint job, made of Columbus SL, featuring the perfection and attention to details to providing the best performance you might expect from early 80s racing machine. Fully build with top of the line Campagnolo Super Record groupset, 3ttt cockpit, Mavic GP4 rims and San Marco Concor saddle.

Condition: Used, but good condition. Original paint and decals. Some signs of normal use. No cracks, no dents, not bent. All parts are working fine.