Mapei was an Italian-based pro cycling team active from 1993 to 2002, named after sponsoring firm MAPEI. They were the biggest and most ambitious team that cycling has ever seen and won practically everything. Looking back from another decade, we examine that Mapei team earned a unique place in cycling history. For 7 years in a row (1994-2000) they won UCI Team rankings. Stars riders included Abraham Olano, Johan Museeuw, Michele Bartoli, Franco Ballerini, Óscar Freire, Frank Vandenbroucke, Axel Merckx, Andrea Tafi, Tony Rominger, Paolo Bettini among the others. The Colnago C40 won 5 out of 6 editions of Paris-Roubaix in years (1995-2000) and several world champion titles in years 1996-2002.

Spaniard Oscar Freire was one of the one-day classic riders, having won the world championship three times (1999, 2001 and 2004). With 3 rainbow jersey he is equalling Binda, Van Steenbergen, Merkcx and Sagan. 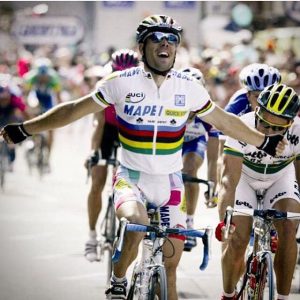 Here we are proudly presenting the legened of the one day classics – COLNAGO C40 B-Stay MAPEI Wolrd Champion, which dates back to 2002. Full carbon frameset is shinning in outstanding World champion edition paintjob, equipped with Campagnolo Record 10s groupset, Campagnolo Neutron wheels and ITM Colnago cockpit. One of the last real bikes. No much words needed.

Condition: Used, but very good condition. No cracks, no dents, not bent. Some signs of normal use. All parts are working fine.