The Carrera-Podium workshop was founded in 1989 by former professional rider and Carrera team manager Davide Boifava together with LucianoBracchi and Francesco Boifava.  The brand was born from the needs of the Carrera Team and its champions Steven Roche, Claudio Chiappucci and Marco Pantani.  The workshop had a unique synergy because the professional team worked from the same building and the team riders were built in product testers.  The Carrera bicycle brand has a rich history of over 500 victories in the most demanding road races in Europe.  Many firsts were achieved at Podium such as the first frame in which aluminum was joined to carbon and the first custom on size carbon frame made in Italy.  They were among the first to build titanium frame for professional racing and the use of ceramical aluminum to improve the comfort of aluminum racing bikes.

In 1995, he was riding for Carrera Jeans Tassoni Team. In early season was hit by a car while training, preventing him from riding the Giro, but he rode the Tour de France and won 2 stages. He also finished 13th in general classification and claimed his second successive best young rider award. He also won a stage at the Tour de Suisse and finished third in the 1995 World Championships road race in Colombia. 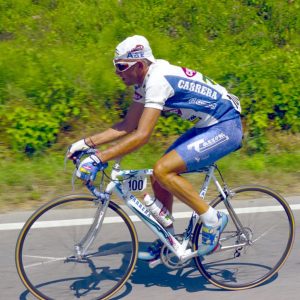 In 1995 some of the top riders had an opportunity to have several custom made bikes. Some of them were still racing on steel bikes, some already had full carbon bikes, while Marco Pantani choosed titanium. He had several different bikes each season. In 1994 and 1995 Tour de France he rode Carrera Titanium bikes with normal rounded tubing. After the Tour they provided him a new Carrera Titanium bike which was made by same tubing as Bianchi 110, but has aluminium front forks. He used that bike in August and September 1995. Above is a photo from GP Camaiore 1995 where he finished 7th and was racing on the bike we are presenting here.

Proudly presenting another special piece of the cycling history, a bike that belongs to a museum – CARRERA Titanio, used by Marco Pantani in second part of 1995 season. It was one of several bikes that Pantani used that year. This one is made of superlight and stiff titanium Hyperion tubing, aluminium forks, shinning in Carrera Jeans paint-job. Fully built with Campagnolo Record 1995 groupset, Cinelli Grammo titanium stem, special custom made saddle TCS Sintesi marked with Selle Italia logo.

Authentic and unique bike, only one made. A museum piece.

Condition:  Used, but good condition. Original paint and decals. No cracks, no dents, not bent. Some signs of normal use. All parts are working fine.