The Carrera-Podium workshop was founded in 1989 by former professional rider and Carrera team manager Davide Boifava together with LucianoBracchi and Francesco Boifava.  The brand was born from the needs of the Carrera Team and its champions Steven Roche, Claudio Chiappucci and Marco Pantani.  The workshop had a unique synergy because the professional team worked from the same building and the team riders were built in product testers.  The Carrera bicycle brand has a rich history of over 500 victories in the most demanding road races in Europe.  Many firsts were achieved at Podium such as the first frame in which aluminum was joined to carbon and the first custom on size carbon frame made in Italy.  They were among the first to build titanium frame for professional racing and the use of ceramical aluminum to improve the comfort of aluminum racing bikes.

Marco Pantani wasn’t a world class climber at the Tour de France 1994 yet. He crashed after 22km of stage 17. A whole Carrera team stopped and waited for him. Pantani was heavily bleeding from his left knee. He got a spare bike and it was the bike we are presenting here. He got back in the peloton and attacked the main group on the last climb and finished the stage on 3rd place (2 riders were in breakaway). 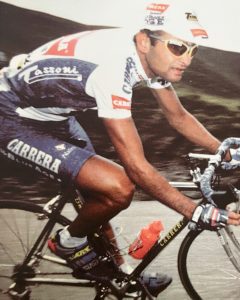 Proudly presenting this special piece of the cycling history, a bike that belongs to a museum – CARRERA One Titanio, used by Marco Pantani at the Tour de France 1994. It was one of several bikes that Pantani used that year. This one is made of superlight and stiff titanium tubing, steel forks, with a slightly smaller geometry so it was especially made for faster climbing. Top tube is about 7mm shorter, head tube is a bit shorter as well, so that’s why they used a special spacers for the headset. Fully built with Campagnolo Record 1994 groupset, Cinelli Grammo titanium stem, Flite saddle. Engraved “M.Pantani” under the bottom bracket.

The bike comes with the signed letter Pantani’s local mechanic, a photo of the bike with T.Tacchella (owner of Carrera brand) and Boifava (Team manager of Carrera Team), a photo from the Tour de France 1994. A museum piece.

Condition:  Used, but good condition. No cracks, no dents, not bent. Original decals.