Carrera was an Italian-based road bicycle racing team active from 1984 to 1996, named after sponsoring Italian jeans manufacturer Carrera and became an icon of Italian cycling successes.

In 1989, Carrera manager Davide Boifava together with Luciano Bracchi and Francesco Boifava founded Carrera Podium, a high-end bike manufacturer. It was founded as a result of experiences gained in professional cycling races by the three partners. The company’s goal which is simple and clear, and which is supported by a rich history of over 500 victories in the most prestigious competitions. From 1990 on, Pantani, Chiappucci, Roche, Bontempi,  Abdoesjaparov, Sorensen, Tafi, Zberg, Zaina,.. rode this Carrera bikes made by their experts. 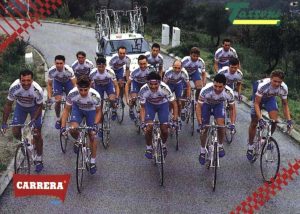 Iconic steel frameset – Carrera ”Gold One” by Podium  is  now for sale in our store. The frameset dates back to 1993, shines in beautiful Team edition paintjob, made of Columbus EL (Extra leggeri means Extra light) and is marked with A29 under the bottom bracket shell.

The icon. Ready to be built.

Condition: Mint/new old stock condition. The frame was build in 1990s and never ridden since then. The frame has no cracks, no dents and is not bent. Original paint and decals.