In 1989, Carrera manager Davide Boifava together with Luciano Bracchi and Francesco Boifava founded Carrera Podium, a high-end bike manufacturer. It was founded as a result of experiences gained in professional cycling races by the three partners. The company’s goal which is simple and clear, and which is supported by a rich history of over 500 victories in the most prestigious competitions. From 1990 on, Pantani, Chiappucci, Roche, Bontempi,  Abdoesjaparov, Sorensen, Tafi, Zberg, Zaina,Pavlic.. rode this Carrera bikes made by their experts. In years 1989-1996 CARRERA Podium supplied bikes for CARRERA Jeans Team.

Beat Zberg (born 10 May 1971 in Altdorf, Uri) is a former professional road cyclist from Switzerland. In 1993 he signed for famous CARRERA Team and stay with them until 1996. In 1997 he rode for Mercatone Uno. In years 1998 -2003 he rode for Rabobank Team. He won 28 races among professionals in his carrer. Many of them were one day classics and semi-classics. In 2007 he became the Swiss National champion winning the road race alone and over 2 minutes ahead of 2nd placed F.Cancellara. 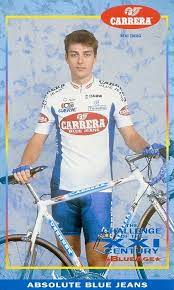 Great catch for any bike collector.

Condition: Used, but good condition. No cracks, no dents, not bent. Original paint and decals. Signs sings of normal use. All parts are working fine.