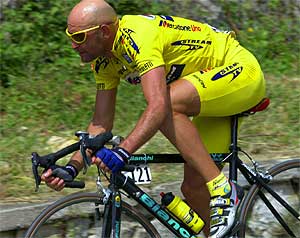 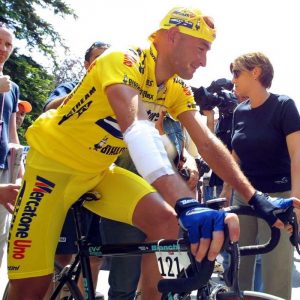 Bianchi’s Reparto Corse (Bianchi’s Race Department) facility hand built frames for their top riders and of course Marco Pantani was one of them riding for Mercatone Uno sponsored by Bianchi. Their top model  XL EV4 Reparto Corse is made of lightweight Hyperalloy triple-butted 7k aluminium developed in collaboration with Dedacciai. Aluminum was the material of choice back then, even some his rivals rode full carbon bikes that season. XL EV4 met Pantani’s  specifications with slightly sloping geometry, and a relatively short head tube to suit his aggressive in-the-drops climbing style. Though not super-stiff as compared to today’s carbon fiber machines, Pantani’s bike was very light, even by modern standards. 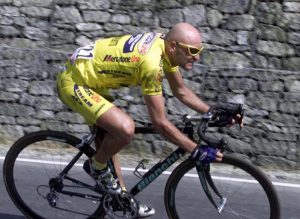 * Because we will get a lot of comments and questions about it so here are some facts. We can’t /don’t want to claim that Pantani rode this bike back in 2001, but the fact is that the compoments are identical and and the measurments are almost identical or the same. Unfortunately we don’t have a confirmation the bike was ridden by Pantani, otherwise the asking price would be 50.000€.

Condition: Used as a show room bike. No cracks, no dents, not bent. Groupset is in very good condition.