Throughout Bianchi’s 130-year history, the Specialissima name has represented the pinnacle of the Italian legend’s road machine line-up. The ”Specialissima” was introduced in early 1960s as successor of famous ”Campione del mondo” model and remains Bianchi’s top model till today.

Some say the Bianchi X4 is the most perfect steel racing bike ever produced. The X4 was the last of the very famous Specialissma bikes produced by Bianchi before the company paired down the Specialissma look with early 90’s lugless and unicrown fork designs. For the dedicated Bianchi collector, the Bianchi X4 is high on the list of must have bikes. Bianchi produced the X4 in years between 1986 and 1991, as a development of the “Centenario 1985”. The early X4 was constructed from Columbus SLX, known as the best choice for professional racing. The entire Team Gewiss Bianchi used Bianchi Specialissima X4 bikes in years 1987-88 with Moreno Argentin, Davide Casani, Emanuele Bombini, Alberto Volpi, Jesper Worre and others on board… 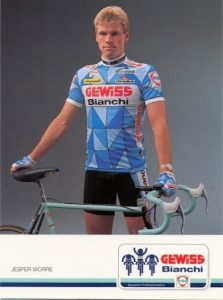 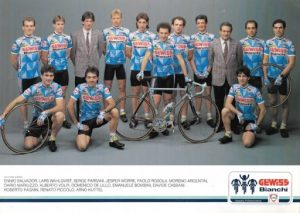 A dream for every vintage bike collector. Original condition!

Condition: Used, but good condition. Original paint and decals. No dents, no cracks, not bent. Some signs of normal use. Some paint-chips under the bb. Groupset and components are in good condition and works fine.