Bianchi’s Reparto Corse (Bianchi’s Race Department) facility hand built frames for their sponsored teams and Team Bianchi with Jan Ullrich was one of them back in 2003. The entire team was using Bianchi EV3 Reparto Corse, made of lightweight Hyperalloy triple-butted 7k aluminium. Aluminum was the material of choice back then, even some his rivals rode full carbon bikes that season. 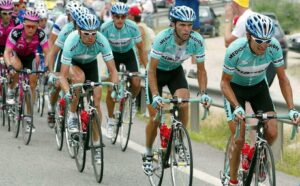 Great catch for all Bianchi lovers.

Condition: Used, but excellent conditon. No cracks, no dents, not bent. Groupset is in very good condition.