Bianchi’s Reparto Corse (Bianchi’s Race Department) facility hand built frames for their top riders and their sponsored teams back in 1980s and 1990s. In 1992  they released their first carbon frame – the Bianchi Carbon Pro which was made in collaboration with ALAN. In early 1990s, a few top pro riders (Indurain, Bugno, Lemond…) used TVT or ALAN frames labeled and painted in colours of their sponsor’s bike. 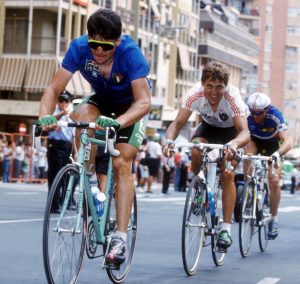 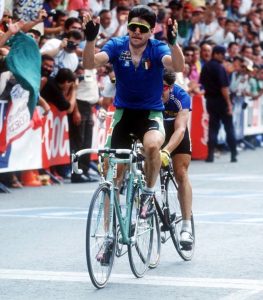 G.Bugno winning his second consecutive world championship title back in 1992 on his Bianchi Carbon Pro.

We can’t /don’t want to claim that G.Bugno rode this bike at the 1992 Wolrds, but the fact is that the compoments are identical and and the measurments are almost identical or the same. With a confirmation the bike was ridden by Bugno, the asking price would be 30.000€.

Condition:  Used, but good condition. No cracks, no dents, not bend. Groupset and components are in good condition and works fine.