The 1953 World Chamiponship took place in Lugano, Switzerland, near Italian border. After 7h30min of racing, Fausto Coppi won with solo attack ahead of Belgiums Derijcke and Ockers. After that prestigious win, Bianchi renamed their previous top model Tour de France  to CDM (Campione del mondo). The CDM was Bianchi’s top of the line racing bike in mid 1950s, later in early 1960s the Specialissima was released. Fausto Coppi and other heroes were wining on very similar Bianchi bike. 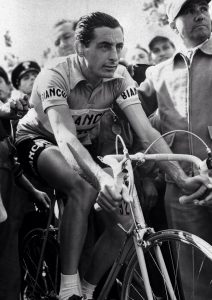 Condition: Used. Original paint and parts. No cracks, no dents, not bent. Some signs of normal use. Some paint chips. All parts are working fine.