Bartali earned worldwide respect for his work in helping Jews who were being persecuted by the Nazis during the time of the Italian Social Republic. It emerged in December 2010 that Bartali had hidden a Jewish family in his cellar and, according to one of the survivors, saved their lives in doing so. Bartali used his fame to carry messages and documents to the Italian Resistance. Bartali cycled from Florence through Tuscany, Umbria, and Marche, many times traveling as far afield as Assisi, all the while wearing the racing jersey emblazoned with his name. Neither the Fascist police nor the German troops risked discontent by arresting him.

There are many stories about Bartali that will never be forgotten. In 1943, he led Jewish refugees towards the Swiss Alps himself. He cycled, pulling a wagon with a secret compartment, telling patrols it was just part of his training. Bartali told his son Andrea only that “One does these things and then that’s that”. Even after the war he never boasted his merits, he used to say: “The good is done, but it is not said. And certain medals hang on the soul, not on the jacket.” 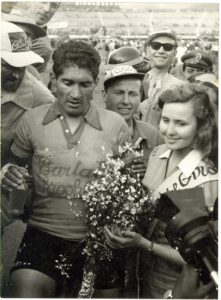 G.Corrieri (Bartali Team) after winning a stage at the Giro

Happy to present a piece of the Italian cycling history, a superb vintage racing machine – BARTALI Corsa by Santamaria, ridden by Giovanni Corrieri (Bartali Team). It dates back to 1950, thanks to special Bartali vintage bike register. In 1950, Corrieri won a stage at the Tour de France and he was ridding the bike we are presenting here. Back in the days each rider had only one bike per season. The frame is made light steel tubing (for that era) and equipped with Cervino Torino gearing system which was much better and more precise compared to Campagnolo Cambio Corsa. Easy to recognize typical Santamaria lugs, fork crown, headbadge and Bartali decals. Built with original Bartali marked parts (crankset, headset, hubs), Cinelli steel stem and handlebar, Brooks saddle, double vintage metal water bottles mounted on the handlebar. No much words needed.

Condition: Used, but good condition. Restored and refurbished. No cracks, no dents, not bent. All parts are working fine.