Trademark Atala was born in 1907 in Milan and is responsible for writing many memorable pages in the cycling history. The Atala cycling team that was created in 1908 and officially retired in 1989, so for sure one the teams with longest existence. It was partnered with several co-sponsors, but Atala was always first  The first two editions of the Giro d’Italia 1909 and 1910, were won Luigi Ganna and Carlo Galetti and both rode for Atala Team. In 1921 artigian frame-builder Cesare Rizatto took over building top road bikes for Atala.

In 1984 the Atala Team were co-sponsored by Campagnolo, so the offical name was Atala-Campagnolo Team. They had 2 big stars on board, swiss sprinter Urs Freuler who won 10 world championships on track and 15 stages at Giro d’Italia in 1980s and Pierino Gavazzi who was 1983 Italian national champion. The team rode Atala Corsa Professionisti bikes build with Campagnolo Super Record, and one of this bikes is presented here. 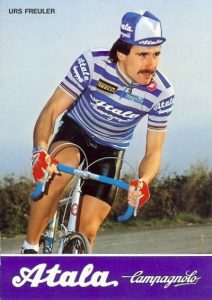 Proudly offering another Italian top level racing machine, tha ATALA Corsa Professionisti by Atala-Campagnolo Team which dates back to 1984-85. The superb frame is made of Columbus SL tubing, shining in beautiful ”light gold” paintjob, with several ”A” cut-outs and Atala pantographs. The rugular Corsa frames that were made for public don’t have enlightened lugs and special V cut-outs, but this one has it, because it was made for their professional riders. This racing machine is completely build with Campagnolo Super Record groupset (pat.84), panotgraph Cinelli cockpit, San Marco Rolls Atala saddle and Mavic GP4 rims. The bike is in amazing and original condition, could be one of the ATALA-Campagnolo Team bikes. No much words needed.

Condition:  Mint / new old stock condition. The frame has no cracks, no dents and is not bent. Original paint and decals. Some tiny tiny signs of storage.