Proudly presenting legendary late 1990s ADA carbon lighweight wheelset made by Dutch carbon expert Cees. The wheels were very desirable among pro-riders in late 1990s and early 2000s but only the greatest champions had a chance to use them simpley because the ADA or Lightweight didn’t have enough pairs for all the riders. Sometimes even the team leaders from different teams borrow those wheels from each other depending on their goals.

ADA wheels were ridden for the biggest goals fo the season only, where the biggest teams and their leaders could avoid sponsor obligations and use non-sponsored equipment (like Tour de France queen stage, spring classic or World Championships). Few riders that used ADA are: Frank Vandenbroucke, Jan Ullrich, Rolf Sorensen, Laurent Jalabert… 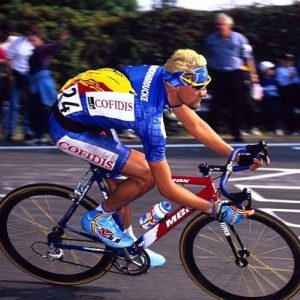 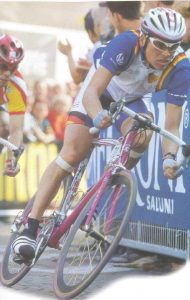 Here is an article from a cyclin magazine where the compared ADA and Lightweight wheels. The conclusion is that ADA wheels are lighter, but less aerodynamic because of the spokes…

“DECEIVINGLY SIMILAR”
” Lightweight or Ada? Both High-Tech-Wheelsets made from Carbon and Kevlar look deceivingly alike and are often reason to arguments among experts: Which pro is on which wheels? A reason for the similarity may be that the dutch ada-owner Cees beers used to be sales partner of Munich manuafacturer lightweight. He copied the successful wheel for large parts, technically it is no match for the original. Stiffness is 38 N/mm for the rear and 56 N/mm for the front wheel. The Ada-Wheels also don`t score concerning aerodynamics. Compared to the carbon blades of the lightweight the bulky Kevlar spokes cause much more drag. The Ada are lighter: wheelset is 1160 gramms, front 20-spoke 525 g and rear 20-spoke 635 g. This makes the Ada set about 100 g lighter than the Lightweights in the “tour” test 7/02. The weight advantage is credited mainly to the rear hub, an original construction and compatible with Shimano as well as Campagnolo. Two allen keys are enough to change casette and rotor. During the test ride the less stiffness of the rear wheel was noticable through rubbing on the brake pads when pedalling uphill standing up.”

The wheelset we are offering here is probably one of the last new old stock pairs on the planet. They were used for display only and comes with Shimano and Campagnolo freewheel + spare bearings.