The French aerospace company TVT (Technique du Verre Tissé) produced some of cycling’s first carbon fiber tubes. Their technology was utilized by various manufacturers, including LOOK and Bottechia. TVT  is responsible for some of the most successful early carbon fiber bikes in the pro peloton. Bernard Hinault, Pedro Delgado, Greg Lemond and Miguel Indurain all raced on TVT bikes to victories in the Tour de France! The TVT frames were just the choice of top Grand Tour riders.

Miguel Induráin Larraya (born 16 July 1964)  is considered as one of the best road cyclists ever. Induráin’s ability and physical size 186 cm and 80 kg earned him the nickname “Miguelón” or “Big Mig“. He was the youngest rider ever to win the Spanish amateur national road championship, when he was 18, at 20 the youngest rider to lead the Vuelta a España, and at 20 he won a stage of the Tour de l’Avenir. 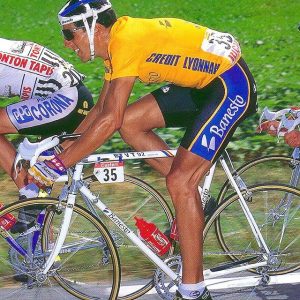 M.Indurain (Team Banesto) on the way to win his first Tour de France back in 1991

M. Induráin won five Tours de France from 1991 to 1995, the fourth, and last, to win five times, and the only five-time winner to achieve those victories consecutively. He won the Giro d’Italia twice, becoming one of seven people to achieve the Giro-Tour double in the same season. He wore the race leader’s yellow jersey in the Tour de France for 60 days. Since the revoking of Lance Armstrong’s seven wins, he now holds the record for the most consecutive Tour de France wins and shares the record for most wins with Jacques Anquetil, Bernard Hinault and Eddy Merckx.

Unfortunately we don’t have the proof this bike was ridden by Miguel Indurain. Let’s say it’s an excellent replica. Perfect bike to enrich any vintage bike collection.

Condition: Excellent condition. The frame has no cracks, no dents. Some very very tinny signs of use. Groupset and components are in great condition with some NOS parts.