Miguel Induráin Larraya (born 16 July 1964)  is considered as one of the best road cyclists ever. Induráin’s ability and physical size 186 cm and 80 kg earned him the nickname “Miguelón” or “Big Mig“. He was the youngest rider ever to win the Spanish amateur national road championship, when he was 18, at 20 the youngest rider to lead the Vuelta a España, and at 20 he won a stage of the Tour de l’Avenir.

M. Induráin won five Tours de France from 1991 to 1995, the fourth, and last, to win five times, and the only five-time winner to achieve those victories consecutively. He won the Giro d’Italia twice, becoming one of seven people to achieve the Giro-Tour double in the same season. He wore the race leader’s yellow jersey in the Tour de France for 60 days. Since the revoking of Lance Armstrong’s seven wins, he now holds the record for the most consecutive Tour de France wins and shares the record for most wins with Jacques Anquetil, Bernard Hinault and Eddy Merckx.

His physique set him apart from his competitors. His lung volume was 8 liters, his resting heartbeat the lowest ever measured on a healthy athlete (28 beats per minute) and the power he could produce averaged at 455 watts. Miguel was a brute force of nature. Many experts thought he is too heavy to win Tour de France.

The bikes for the Banesto Team were traditionally made by Pinarello – with a short break where the Spanish brand Razesa delivered the frames. Those beautiful Pinarello were built by Dario Pegoretti – the legendary framebuilder from Caldonazzo (Trento) and later Verona, is widely considered to be one of the best framebuilders of his era. And thus, he was responsible for bikes of some of the most famous riders of their time. Marco Pantani, Stephen Roche, Claudio Chiappucci, Mario Cipollini, Andrea Tafi and others. He famously welded M.Indurain’s 1994 Tour de France frame which would become the last steel bike to win Tour de France. 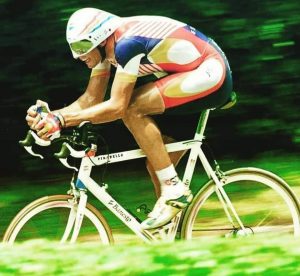 Pegoretti was one of the pioneers of TIG-welded frames, Steel and Aluminium were his materials of choice. And being very creative, he was frequently checking out tubing companies for specially shaped tubes. He ordered the tubes from French tubing specialists Excell.

The tubeset is inspired by the aerodynamically shaped steel designs which were traditionally utilized in airplane constructions. He created a very aerodynamic and stiff time trial bike with unique look with the headtube protruding forward like the blade of a knife. Being not only aerodynamic but also comparably strong, this type of frame proved to become Indurains favourite and he used it on several occasions between 1993 and 1996. The early version of this bike came with a short head tube (’93/’94) but in 1995 that changed. This bike here is the later version (recognisable by the longer head tube). 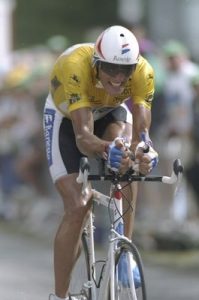 M.Indurain at the Tour de France on Pinarello TT

Extremely proud to offer a piece of the cycling history – PINARELLO TT Banesto racing machine of M.Indurain which dates back to 1995. A museum piece for the most prestigious bike collectors.

Condition: Used, but good condition. Original paint. No cracks, no dents, not bent. Some signs of normal use. Groupset and components are in good condition.