Giovanni Pinarello was born in Catena di Villorba, Italy in 1922. He was the eighth of 12 brothers. At the age of fifteen, Giovanni began making bicycles at the factory of Paglianti. After a successful amateur career he turned professional in 1947. After his carrer, in 1952 he founded Cicli Pinarello S.p.A. in Treviso, Italy. The  ”Montello SLX” was their top model in years 1984-’89 and basically the  frame with which Pinarello started to dominate on cycling races around the globe. In mid 1980s Montello SLX achieved many important  victories such as the 1984 Olympics Road Race, Vuelta a España, the Giro d’Italia and stages of the Tour de France.

Pedro Delgado Robledo was born on April 15 1960, also known as Perico. He won the 1988 Tour de France, as well as the Vuelta a España in 1985 and 1989. Delgado is 171 cm tall and used to weigh 64kg. He was a good climber, with an aggressive style, making cycling a spectacle, which gained him fans. On one hand, there were days when he was extremely successful attacking. On the other, he occasionally suffered from big losses of time due to mistakes or strokes of bad luck. He was also a good time-trialist until the nineties, when it became difficult for him to adapt to technical changes in the time-trial bicycles.

The ending of the 1987 Tour de France and the 1985 Vuelta a España and the whole 1989 Tour are among his more memorable participations in major competitions. Delgado was such a consistently strong rider that he finished in the top 10 of eighteen Grand Tours. He works now as a sports commentator for Televisión Española during important cycling events. Delgado inspired the name of the Scottish indie-rock band The Delgados. 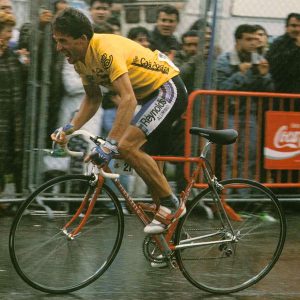 P.Delgado (Reynolds) has won the Vuelta 1989

Condition:  Used, but good condition. Original paint and decals. No cracks, no dents, not bent. Some signs of normal use. All parts are working fine.