Dimitri Konyshev, born 18 February 1966 (in Gorky) is a former Russian pro cyclist. In 1990 Konyshev would become the first ever rider from the Soviet Union to win a stage in the Tour de France. All total in his professional career Konyshev would win nine Grand Tour stages becoming one of the few riders to win a stage in all three Grand Tours. He won 4 stages at the Tour and the Giro, he also won a single stage in the Vuelta a Espana. He followed his silver medal at the 1989 World Championship with a Bronze medal in 1992 at Benidorm and later in his career during the 2000 Giro d’Italia he won the Points Classification, as well as the overall Combativity Award. 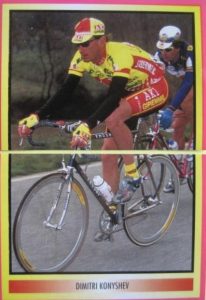 Here we offering an authentic racing bike of Russian rider D.Konyshev, the Moser Leader AX Evolution. The highlights are undoubtedly super quality ORIA FSB (fillet silver brazed) tubing, which main tube end on one side is horizontal ellipse shape and the other side is vertical ellipse shape tube. The frame is definetly stiffer than other frames from this era and is built with top of the line Shimano Dura Ace 7410 8s groupset, Gipiemme Tecno 416 wheels, ITM cockpit and Flite Titanium saddle.