Francesco Galmozzi was born in earlies 1900s in Milan, Italy and is certainly enumerated among the best frame builders of the prestigious North Italian tradition. Thanks to an investment of Artemira Gerbi (daughter of the famous cyclist Giovanni Gerbi), Galmozzi was able to found the brand Gloria back in 1922. A few years later, he joined Cicli Magri, which he eventually acquired in 1938 and by this founded his own brand Ciclo GALMOZZI.

Galmozzi earned its reputation in top level framebuilding by hand-built meticulous and craftsman’s attention to details. He didn’t produce many bicycles, he was an artisan and incredibly good at manufacturing custom requests. His son Angelo joined the family business in 1959 in their workshop in Milan and soon they became the creators for some of the finest racing bicycles. They built bikes for a numbers of professional riders, one of them Rik van Looy (Faema Team)  who won 1961 World Championship with the Galmozzi Specialissima.

According to Galmozzi’s last name he developed a logo which became very famous and recognisable. “Gallo” in Italian means rooster and “Mozzi” means hubs so a rooster on a hub. 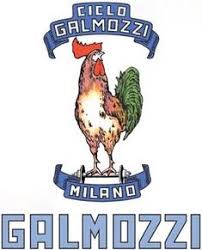 Here we are proudly presenting f – GALMOZZI Super Competizione which dates back to mid 1970s. The frame is work of art, made of Columbus SL tubing and was the reference by which other racing steel frames were judged back in the days. The frame is featuring the perfection and attention to details to providing the best performance you might expect from 1970s racing machine. Only the best parts are good enough for such a masterpiece: Campagnolo Nuovo Record groupset, Cinelli cockpit, Nisi rims. Love at first sight.

Condition: Used, but good condition.  The frame has no cracks, no dents, not bent. Some signs of normal use. All parts are in good condition and are working fine.