Fausto Coppi (September 15, 1919 – January 2nd, 1960), was an Italian cyclist, the dominant international cyclist of the years each side of the Second World War. His successes earned him the title Il Campionissimo, or champion of champions. He was an all-round racing cyclist: he excelled in both climbing and time trialing, and was also a great sprinter. He won the Giro d’Italia five times (1940, 1947, 1949, 1952, 1953), the Tour de France twice (1949 and 1952), and the World Championship in 1953. Other notable results include winning the Giro di Lombardia five times, the Milan–San Remo three times, as well as wins at Paris–Roubaix and La Flèche Wallonne and setting the hour record (45.798 km) in 1942.

Team Polti was an Italian professional cycling team. It became an independent team in 1994, after the separation of Lampre-Polti, and was active until 2000. Team Polti began in 1994 with Gianluigi Stanga as directeur sportif and Vittorio Algeri and Claudio Corti as managers. The team used Fausto Coppi bikes. Team Polti was one of the strongest teams in mid/late 1990s with many great riders on board: K.Abdoujaparov, Gianni Bugno, Richard Virenque, Jörg Jaksche,  Romāns Vainšteins, Mauro Gianetti, Mirko Celestino…

In 1993 the company F.LLI MASCIAGHI, owner of the brand Fausto Coppi, put in charge Giovanni Pellizzolli of the design and manufacturing of their top line racing bikes which were used by Team Polti. They achieved many many victories. In 1999 their top of the line bike was called KP1 Plus, made by Altec 2 Plus Aluminium. Aluminium was material of choice back in late 1990s. Also Celestino biggest rivals at the Tour of Lombardy 1999 (won by Celestino) were using aluminium bikes (Ullrich on Pinarello, Camenzind on Colnago, Pantani on Bianchi, Casagrande on DeRosa, Vandenbroucke on MBK…) 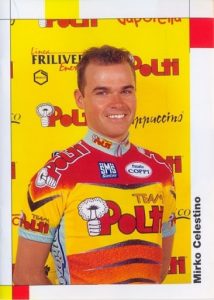 Mirko Celestino (born 19 March 1974 in Albenga) is an Italian former professional road racing cyclist, specialist for one day classics. His biggest career achievements to date include winning the Tour of Lombardy 1999, the HEW Cyclassics 1999, Coppa Placci 1999 and and two-time winner of Milano–Torino (2001 and 2003). 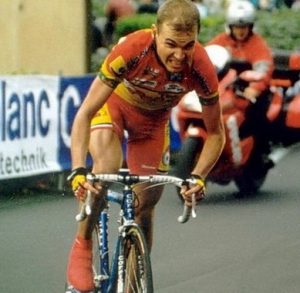 Here we are proudly presenting another Italian vintage racing machine – Fausto Coppi  KP1 Plus ridden by Mirko Celestino (Team Polti) back in 1999. This superb frameset made of Altec 2 Plus tubing built with Shimano Dura Ace 7700 groupset, San Marco saddle, Fir wheels. One of the lightest bikes in pro peloton back then – weight 7.85kg (as on photo). Extraordinary piece, perfect to enrich any classic bicycle collection or just enjoy a fast and comfortable ride.

Condition: Used, but good condition. Original paint and decals. No dents, no cracks, not bent. Some signs of normal use. All parts are working fine.