Guiseppe Drali was born on November 11th 1928 in Milan, son of Carlo Dralli who opened his his bike shop back in 1925. Giuseppe Drali joined his father in the shop at the age of 10. In 1945 after the war break, Bianchi resumed manufacturing and Carlo and Beppino were commissioned to produce the bicycles for a champion that would make history: Fausto Coppi. In 1946 Fausto Coppi wins the first “Milan-Sanremo” on a frame built by Drali family. In 1949 they created the Bianchi Specialissima “Drali” track bikes for Fausto Coppi. During the 1950s and 60s Carlo and Giuseppe Drali were two of the small band of Milano frame builders who worked for Bianchi’s Reparto Corse Racing division making team frames for not only Coppi but also Baldini, Nencini and Gimondi. In 1970 when Bianchi closed it’s in-house racing division and for the next 20 years, G.Drali continued building small numbers of race frames decaled as Bianchis for some of their pro teams…

A legendary person in cycling world, has worked for the greatest Italian cycling champions including Coppi and Bartali. Mr. Dralli adjust and built bikes for 60 years, at age 82 he has been appointed to ”Cavalliere dell Lavoro”  (Knight of labour) by Italian Republic. 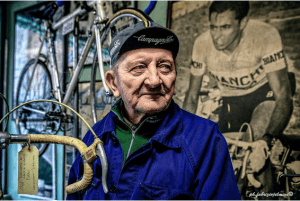 Here is an interesting story about the Drali’s poker logo you can see on the head tube of his brand: In a period of few months back in 1949, Fausto Coppi won a 4 very prestigious races (Giro d’Italia, Tour de France, Milano San Remo and Italian Championship). Coppi was the biggest idol of Guiseppe Drali, who was impressed about Coppi’s ”Poker”. Few years later Drali’s dream come true when he worked in Bianchi Reparto Corse team with his idol Fausto Coppi (Il Campionissimo). In 1970s Dralli started to build frames on his own. He created a special logo inspired by Coppi’s 4 extraordinary wins from 1949.

Here we are offering one of Drali’s masterpieces which dates back to early 1980s. Very rare frameset is made of Columbus SL, shows very elegant fork crown, engravings and cut-outs. Built with top of the line Campagnolo Super Record groupset, San Marco Laser saddle, Cinelli stem and handlebar. L’Eroica ready.

Condition: Used, but great condition. No cracks, no dents not bent. Some signs of normal use. All parts are working fine.