Mapei was an Italian-based pro cycling team active from 1993 to 2002, named after sponsoring firm MAPEI. They were the biggest and most ambitious team that cycling has ever seen and won practically everything. Looking back from another decade, we examine that Mapei team earned a unique place in cycling history. For 7 years in a row (1994-2000) they won UCI Team rankings. Stars riders included Abraham Olano, Johan Museeuw, Michele Bartoli, Franco Ballerini, Óscar Freire, Frank Vandenbroucke,  Andrea Tafi, Tony Rominger, among the others… COLNAGO was an official bike suplier for MAPEI team in years 1994-2002. 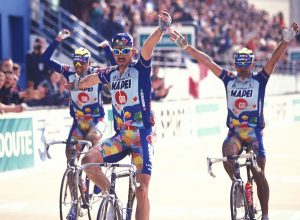 The TECNOS is Colnago’s lightest steel racing frame made from 1995-2000. Superb frame is made of customized  Columbus Nivachrom steel tubes, oversize top and down tubes with five-leaf-clover shaping. Chromed three point crown-tip lugs on head tube and Precisa steel fork.

Proudly presenting this legendary and one the very desirable team bikes  – COLNAGO Tecnos MAPEI. The frame is made of superlight  tubes, shining in legendary MAPEI paintjob and build with superb Shimano Dura Ace 7410 groupset.  The frame is marked with M4 at the rear drop-outs. The register is saying it belongs to Italian rider Giuseppe Di Grande who raced for Mapei GB team in years 1996-1999. No much words needed.

The ICON. For true collectors

Condition: Used, but good condition. Original paint and decals. No dents, no cracks, no bends. Some paintchips and signs of normal use. All parts are working fine.