Colnago Super 1969 is one of earlier Ernesto’s bikes and for sure one of the most collectible racing bikes. It was released as a successor of Colnago Freccia. Super became a legend with Vittorio Adorni Team Scic and later Eddy Merckx ridding for Molteni Team. The early Super was also called “Super Roma“, it was designed for professionals riders and thanks to Columbus SL tubing, it was a synonym for stiffness and lightness. 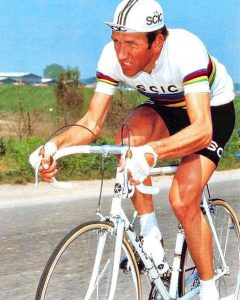 Here we are proudly offering another very rare steel beauty, one of earlier Colnagos masterpieces – Colnago Super Team SCIC and dates back to 1971-72. The frame is work of art, made of Columbus SL tubing with significant 2 holes on each side of the fork crown and 9 holes under the bottom bracket. It was a reference by which other racing bikes were judged back in late 1960s. Built with Campagnolo Nuovo Record groupset (1968-69), 3ttt stem and handlebar, Fiamme rims. No much words needed.

For all Colnago enthusiats. L’Eroica ready.

Condition: Used, but good condition. Completely restored and refubrished by professional guy. No cracks, no dents, not bent. All parts are in good condition and are working fine.