In response to criticism that Colnago frames were not stiff enough, Ernesto experimented with various crimped-tube frames. In 1983 he introduced their top model ”Master” and the legend was born. The Master was constructed with famous ”star shaped’ top, seat and down tube profile tubing called Columbus Gilco S4 designed by Gilberto Colombo to improve performance. The first version of the Colnago Master was produced in years 1983-87, later Master Più and Master Olympic were released.

Italian cyclist Giuseppe Saronni was one of the best riders in early 1980s, riding for Del Tongo – Colnago Team. In 1982 he won the World Championship in Gooodwood, England riding Colnago Nuovo Mexico which was just launched. In 1983 Saronni won famous one day classic Milano – San Remo and Giro d’Italia. In years 1983 -1985 he was winning on Colnago Master and by no surprise his bike was build with Campagnolo 50th Anniversary groupset. 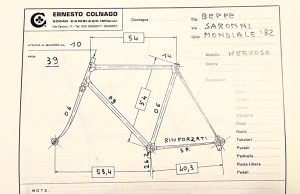 Proudly presenting this legendary steel racing machine from Cambiago – Colnago Master 1st generation, which dates back in 1983, shinning in outstanding Saronni paintjob, completelly built with Campagnolo 50th Anniversary groupset (no.2755), 3ttt Colnago cockpit, Mavic SSC rims and San Marco Concor saddle. The cherry on the top of the cake is the set-up and frame geometry which are exact same as Saronni’s from 1983. No much words needed. The Saronni’s just get better with age, same as fine wine…