Filippo Ganna (born 25 July 1996) is an Italian track and road cyclist who currently rides for Ineos Grenadiers. He is a four-time world champion in the individual pursuit, and has won a total of eight medals at the UCI Track Cycling World Championships. He also won the  2020 and 2021 World Championship time trial tittles, four stages in the 2020 Giro d’Italia and two stages in the 2021 Giro d’Italia. He won the gold medal in the team pursuit at the 2020 Summer Olympics Tokyo in 2021, setting a new world record.

The son of former Italian Olympic sprint canoer Marco Ganna, Filippo Ganna burst onto the scene at the 2016 World Indoor Championships with an unusual negative splits pursuit style of starting very slowly and falling behind, then winding up the speed in the second half to win easily. Filippo Ganna rode for Italian amateur team Team Colpack, before turning professional with UAE Abu Dhabi in 2017. After two years with the team, he joined Team Sky ahead of the 2019 season. 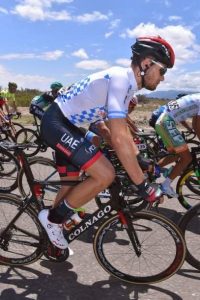 Filippo Ganna (UAE Emirates) back in 2018