Óscar Freire Gómez (born 15 February 1976) is a former Spanish professional road bicycle racer. He was one of the top sprinters in road bicycle racing, having won the world championship three times, equalling Alfredo Binda, Rik Van Steenbergen, Eddy Merckx and Peter Sagan. In the later years of his career, he became more of a classics rider. He has won the cycling monument Milan–San Remo three times, four stages in the Tour de France and seven stages of the Vuelta a España, throughout a successful career. Despite his diminutive stature, Freire was a great sprinter. He had a training philosophy where he rode shorter distances than most pro cyclists, sometimes covering only about half the distance his colleagues would. When growing up he contracted tuberculosis and narrowly avoided having a leg amputated. 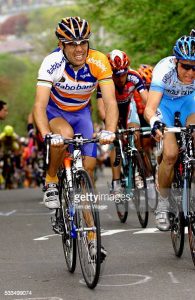 Proudly offering original COLNAGO C40HP Rabobank team bike, ridden by Oscar Freire in season 2004. Shinning in original Rabobank paintjob with completely original setup. Bike stayed in Colnago private museum from 2004 till 2008, then it was sold in charity auction and stayed in private collection in Italy till late 2021, when  acquired by Premium Cycling.

Condition: Used, but excellent condition. No cracks, no dents, not bent. Original paint and decals.