Mapei was an Italian-based pro cycling team active from 1993 to 2002, named after sponsoring firm MAPEI. They were the biggest and most ambitious team that cycling has ever seen and won practically everything. Looking back from another decade, we examine that Mapei team earned a unique place in cycling history. For 7 years in a row (1994-2000) they won UCI Team rankings. Stars riders included Abraham Olano, Johan Museeuw, Michele Bartoli, Franco Ballerini, Óscar Freire, Frank Vandenbroucke,  Andrea Tafi, Tony Rominger, Manuel Beltran among the others…

The Colnago C40 won 5 out of 6 editions of Paris-Roubaix in years (1995-2000) and several world champion titles in years 1996-2002 . The funny fact: If you check the Colnago ”Hall of fame” musseum we can find a Johann Museeuw’s Colnago C40 Mapei winning bike from World Championship Lugano 1996. It’s clear that he rode black seatpost and extraordinary ADA handmade carbon wheels which were are huge advantage back then (basically those wheels were the base for Lightweight). Only a few pairs of this ”futuristic” wheels were ridden in the pro peloton back then. This make us understand why they are so special, even Colnago musseum don’t have them. 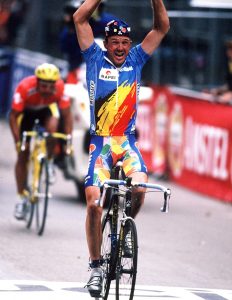 Proudly offering a legendary COLNAGO C40 Mapei Team edition winning machine from 1996.  The frame is marked with M3 (each Mapei’s rider had a number so the frames were marked with M1-M25, M3 very likely belongs to Manuel Beltran) and build  with Shimano Dura Ace 7410/7700 groupset, same build as Museeuw winning bike from WC Lugano 1996.

A real jewel! For all Colnago fans. Extremelly rare.