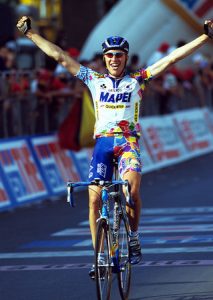 Here we are proudly presenting the legened of cobblestones – COLNAGO C40 Bstay Mapei, which dates back to 2001. Full carbon frameset is shinning in outstanding Mapei paintjob and equipped with superb CAMPAGNOLO Record 10s groupset, Mavic Ksyrium SSC SL wheels, ITM Millenium cockpit. One of the last real bikes. No much words needed.