Carrera was an Italian-based road bicycle racing team active from 1984 to 1996, named after sponsoring Italian jeans manufacturer Carrera and became an icon of Italian cycling successes. In 1989, Carrera manager Davide Boifava together with Luciano Bracchi and Francesco Boifava founded Carrera Podium, a high-end bike manufacturer. It was founded as a result of experiences gained in professional cycling races by the three partners. The company’s goal which is simple and clear, and which is supported by a rich history of over 500 victories in the most prestigious competitions. From 1990 on, Pantani, Chiappucci, Roche, Bontempi,  Abdoesjaparov, Sorensen, Tafi, Zberg, Zaina,Pavlic.. rode this Carrera bikes made by their experts.

Claudio Chiappucci was born 28 February 1963 in Varese, Italy. He was on the podium three times in the Tour de France general classification: second in 1990, third in 1991 and second again in 1992. In 1990 Chiappucci found himself almost casually wearing the yellow jersey after a stage one attack which the favourites allowed him to arrive with a 10-minute time advantage. In subsequent stages he resisted the return of Greg LeMond, only losing the lead of the race in stage 20, the final time trial. In the end, LeMond won the Tour by 2′ 16″, Chiappucci came home with a surprising second place and, moreover, the status of a cycling star. He was the first Italian cyclist to arrive on the podium at the Tour since Felice Gimondi in 1972.

The year of 1991 confirmed to the cycling community that Chiappucci was able to perform consistently. Beginning with a win in the opening classic of the season, the Milan San-Remo, Chiappucci rode the Giro d’Italia and the Tour of France. 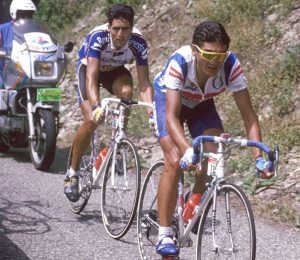 Chiappucci and Indurain at the Tour de France

His most famous victory was stage 13 of the 1992 Tour de France, when he attacked on the first climb of the day, 245 km from the finish, and arrived in Sestriere after holding off a thrilling chase by Miguel Indurain and Gianni Bugno. Chiappucci risked everything by joining the early breakaway that no other GC riders were willing to enter. He dropped the other breakaway riders before the first summit and rode on a solo attack for 125 kilometers. By end of the stage he had jumped to 2nd place overall about ninety seconds behind Induráin. He had wanted to replicate the same accomplishment as Fausto Coppi exactly 40 years earlier. Among the awards received by Chiappucci is a silver medal earned in 1994 at the World Cycling Championship in Sicily. Not gifted with an exceptional physique, Chiappucci was distinguished by a gritty, combative style, always ready to attack; he did not hold back in the face of any climb or time trial.

Happy to offer this iconic Italian steel racing machine – Carrera Podium Team Edition ridden by Claudio Chiappucci in 1991. The frameset is made of steel Columbus tubing, has a number holder and shines in original Carrera Vagabond Team paintjob. The frame is marked with number 06 under the bottom bracket, which was progressive number of C.Chiapucci. The bike was presented in Italian vintage bike magazine Biciclete d’epoca. The bike comes with a magazine, vintage Carrera jersey and souvenir plate with articles of El Diablo. A museum piece. 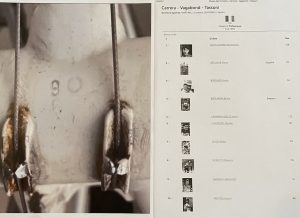 Condition: Used. The frame has no cracks, no dents and is not bent. Original paint and decals. Some signs of normal use. All parts are working fine.

*Shipping worldwide available. Due to copyright reasons the photos are in lower resolution and marked with watermark. If you are interested in buying, have any questions or would like to request  a full HD photo album of the bike please feel free to contact us.