Carrera was an Italian-based road bicycle racing team active from 1984 to 1996, named after sponsoring Italian jeans manufacturer Carrera and became an icon of Italian cycling successes.

Carrera Jeans became the title sponsor in 1984 and R.Visentini finally won the Giro d’Italia in 1986. At the end of 1985 the team had signed Stephen Roche as team captain for the Tour de France. When Roche won the Tour de Romandie just ahead of the 1987 Giro d’Italia, he became the number one favourite for the maglia rosa and wanted to be the team leader during the race, something that Visentini, an Italian with an Italian team and the defending champion of the event expected to be alone. This inter team rivalry came to a head during the race when Roche attacked Visentini. Roche went on to win the race and then the 1987 Tour de France. This was the only time that the Carrera Team would win the Tour and it would be the last time the team won the Giro d’Italia. 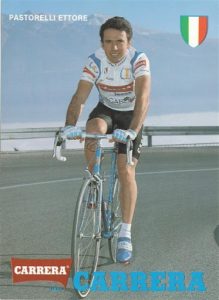 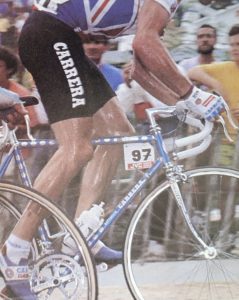 Frameset: Carrera One Team Columbus SLX made for Ettore Pastorelli (marked with 12)

Condition: Used. Original paint and decals. No cracks, no dents, not bent. Some signs of normal use. All parts are working fine.